Let´s discover the new Siemens headquarters together, a sustainable and efficient building06 April 2017Next 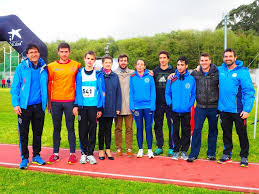 An inclusive sport event which is part of the official athletics calendar. Athletes need to go through this course to comply with  the qualifying standards for bigger competitions, including regional and national events. All athletics disciplines were covered in this event: pole vault, triple jump, march, 100 metres hurdles…

The event hosted over 450 athletes coming from all over the region (237 men and 213 women) in which 3 athletes from ONCE team (Spanish Foundation for the Blind) which competed along with their guides against the other athletes at the event.

Last week, Dani finished runner up in Alicante in the National Athletics  event which proves his great will power and his ability to cope with adversities. He only started to run one year ago and he has demonstrated a great capacity to adapt to difficulties as he managed to cover 1000 metres in 4 minutes and 7 seconds.

The Spanish Foundation for the Blind was also represented by other two athletes: Ana and Juan Ramon. Ana participated in 100 and 400 metres race whereas Juan Ramon did the 400 and 800 metres races. Both of them met qualifying standards for upcoming bigger events.

The first Once Arce Clima trophy is an inclusive sport competition in which athletes with disabilities compete against other athletes in each discipline. This is a highly recommendable to exercise for disabled people because not only they have mental benefits of exercise but also it helps them improve their quality of life so we work all together towards social inclusion of disabled people.

Different Spanish organizations have been  highlighting the advantages of inclusive sport for disabled people claiming this type of events. Spanish  Foundation for the Blind is not an exception  to this so they promote these events not only among sport associations but also school activities.

Another important fact to take into consideration is that we have the chance to witness for the first time Enki Foundation members to compete on track in an exciting 800 metres race, including hand bikes and wheelchair racing.

From Arce Clima we could not be any happier and proud of having the opportunity to participate and sponsor this event thanks to the joint venture with Club Atletismo Sada.

It has been tough months fighting for disabled athletes rights to allow for them to compete  under the same conditions as others. Not a long time ago, they were not allowed to compete against other athletes.

This is our little contribution from Arce Clima  of  which we are gladly proud to be able to help in social integration of disabled people and make their dreams come true as they simply claim to be treated as other participants.